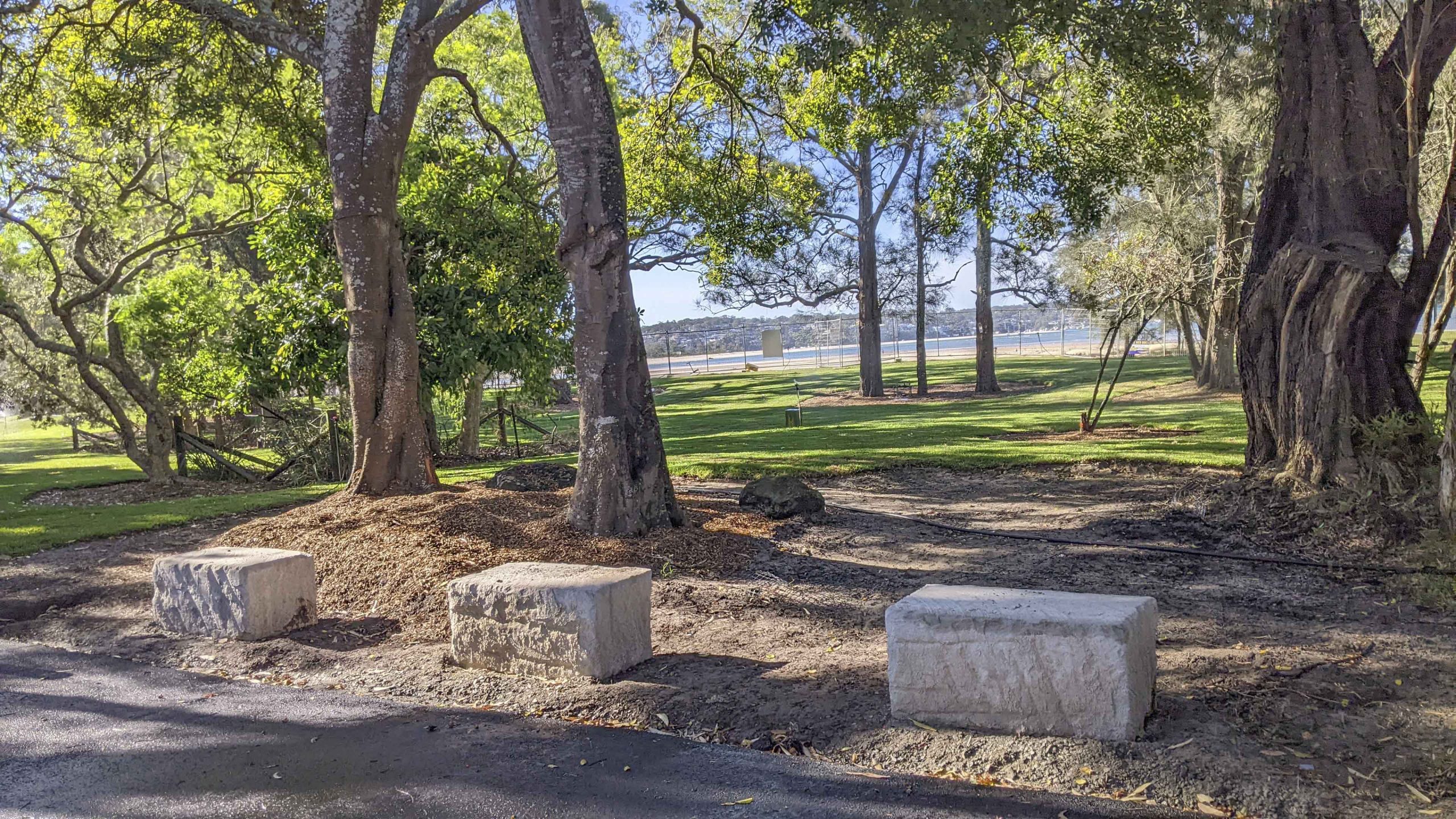 The beautiful Bonnie Vale campground has been a favourite weekend and holiday getaway for Sydneysiders for decades. But for more than 3 years it has been closed as NPWS sought to remediate the asbestos fibres that had become exposed due to vegetation coverage dying in the long drought; leaving soil to be eroded and the asbestos in plain sight.

After lengthy review, planning and approval phases the remediation project commenced. Now after many months it is nearing completion and the results are spectacular……the campground looks fabulous. 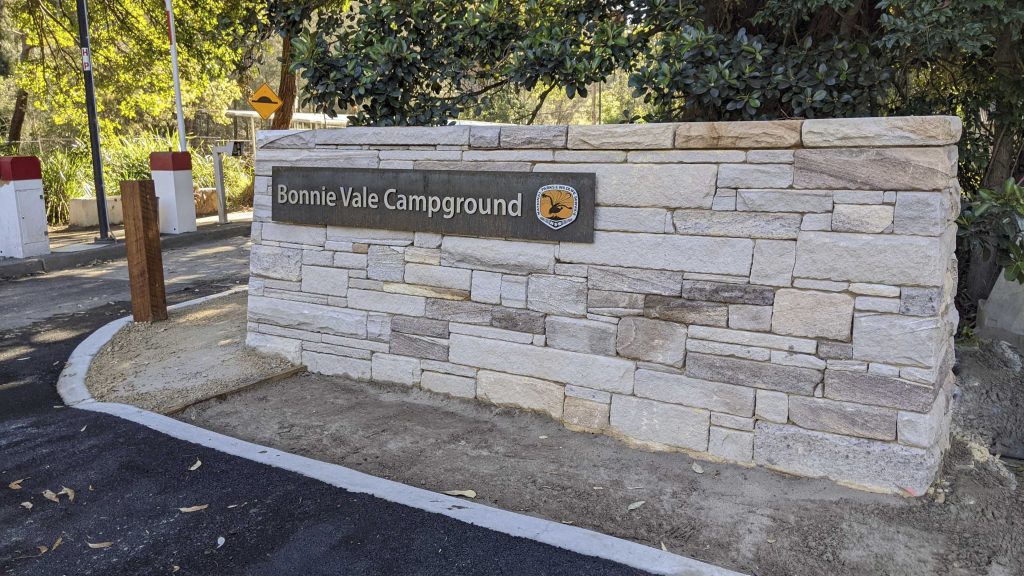 In addition to addressing the asbestos issue the project has taken the opportunity to upgrade the campground with new toilet and shower blocks, new BBQ facilities, powered sites, and much more. 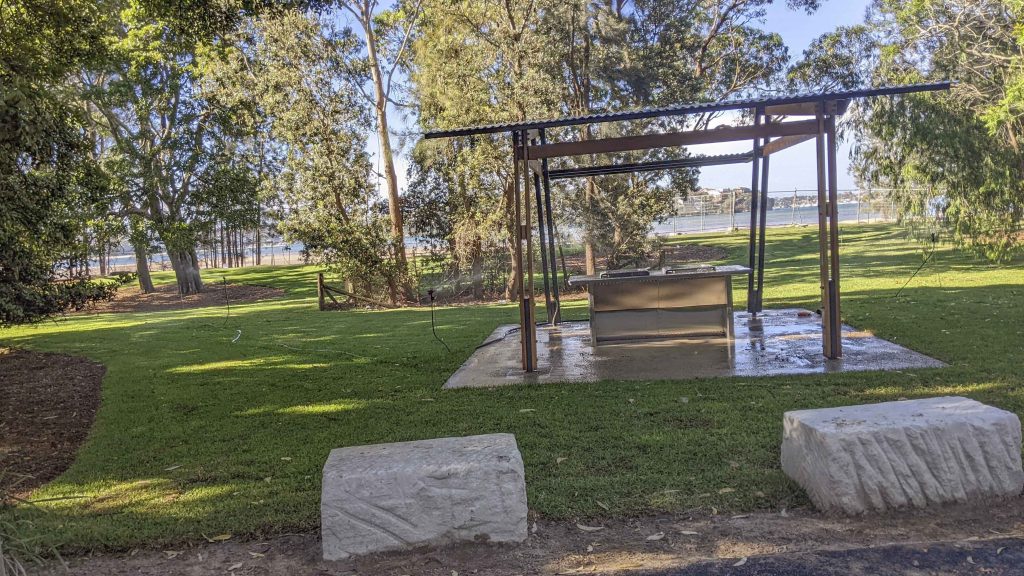 Several new BBQ facilities are across the campground. 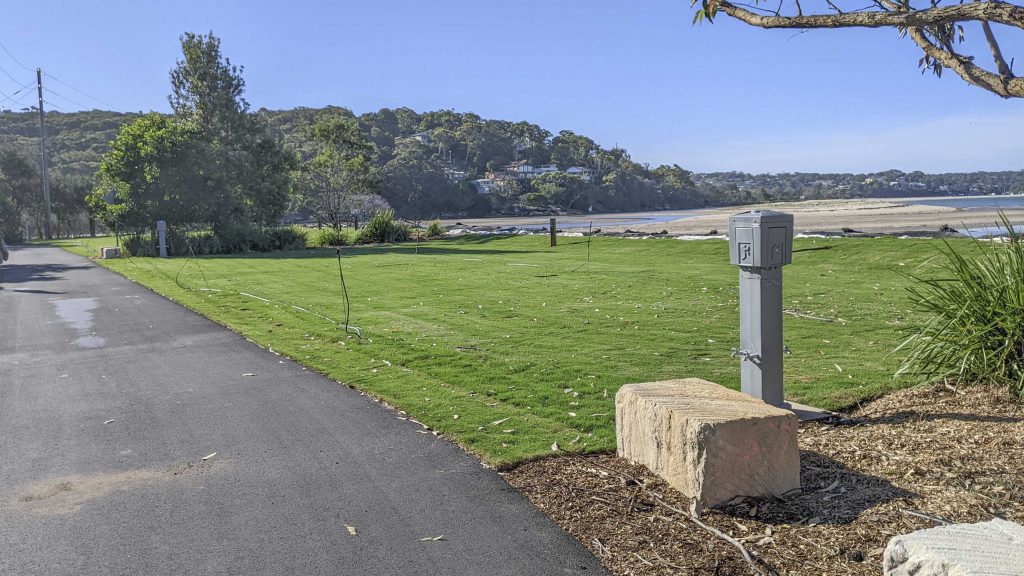 New powered sites are both on the waterside and in under trees. 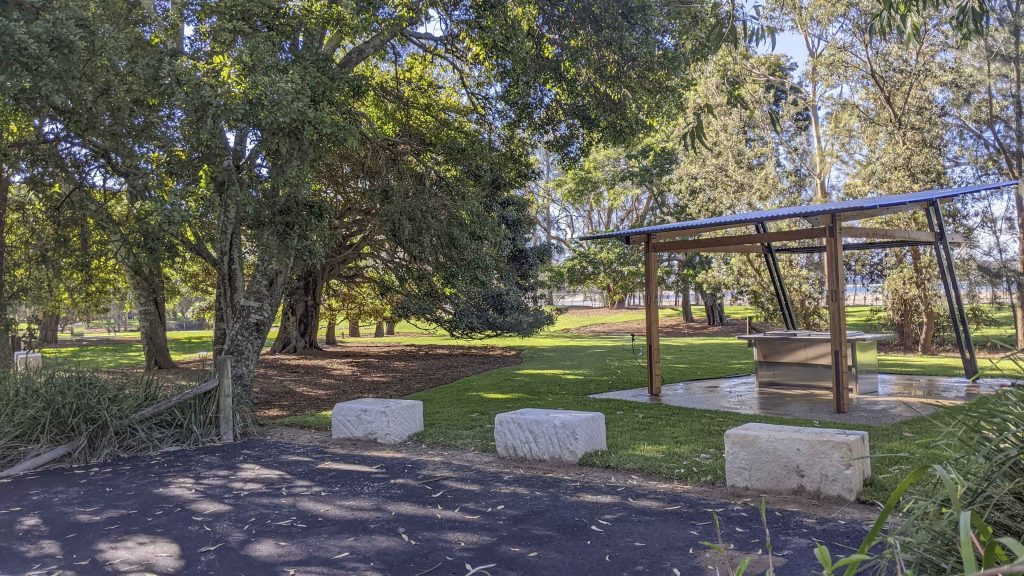 The beautiful old trees have been well preserved and are now showcased in the new setting.

Our wet spring may have been a problem for the project but it has resulted in a vibrant green layer of thick grass across the campground. 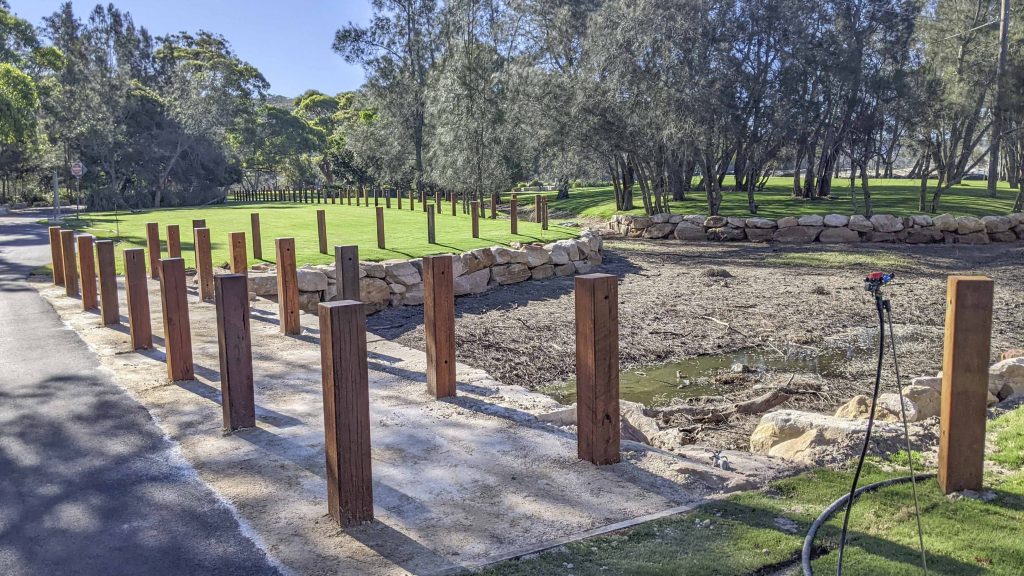 In 2020 two storms closed the  tidal entrance to  Cabbage Tree Basin. The waters built up as the rain fell and there was no exit into Port Hacking. Then finally the waters burst through the narrowest part of Deeban Spit.  This new tidal entrance left the campsite and power lines exposed to erosion from ocean swells and so a key part of the remediation project has been to protect these assets by the construction of a seawall. 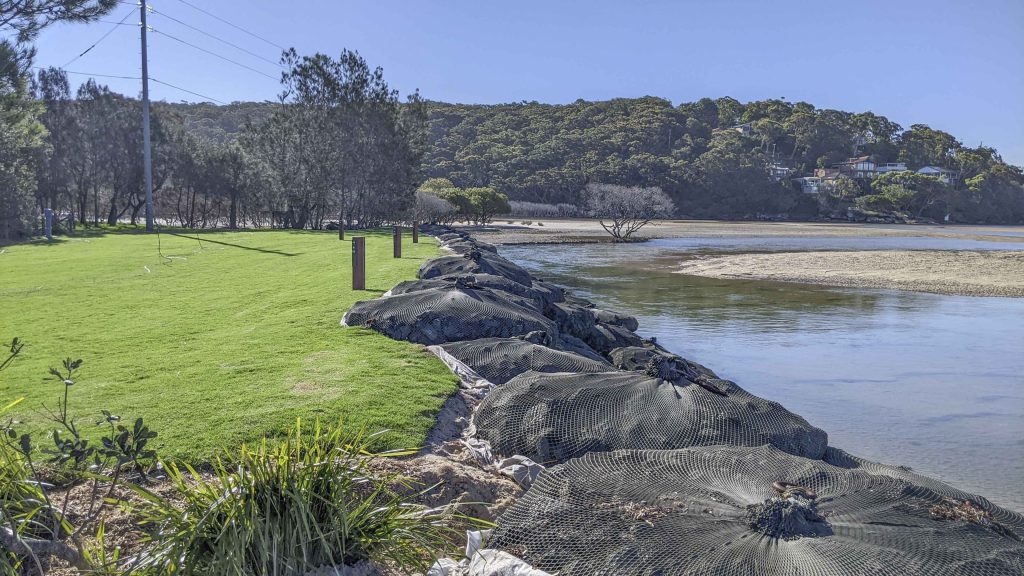 The seawall borders the campsites in some places. 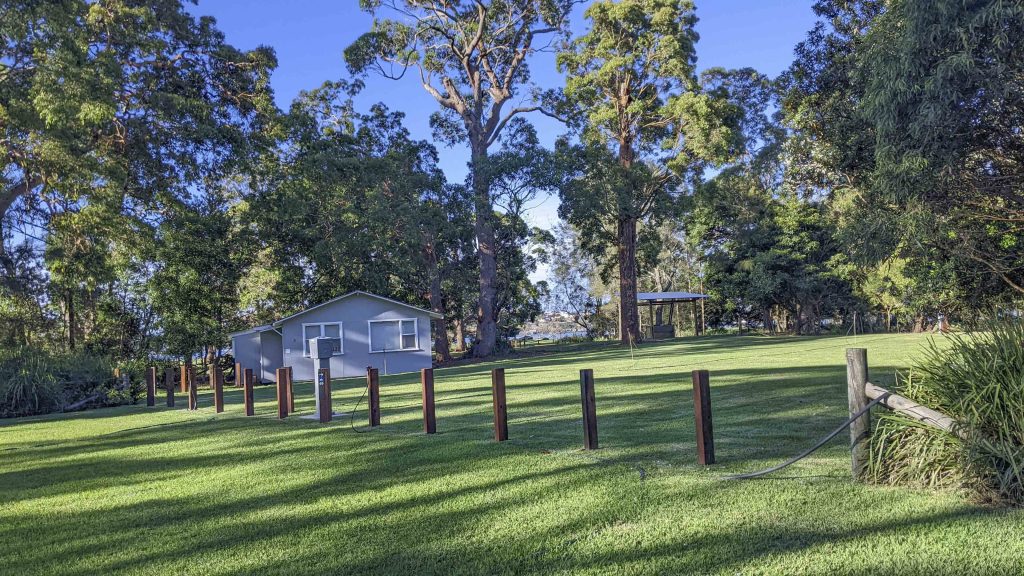 As you wander through the campground there are still a handful of shacks to remind of days past when this was a vibrant shack community. 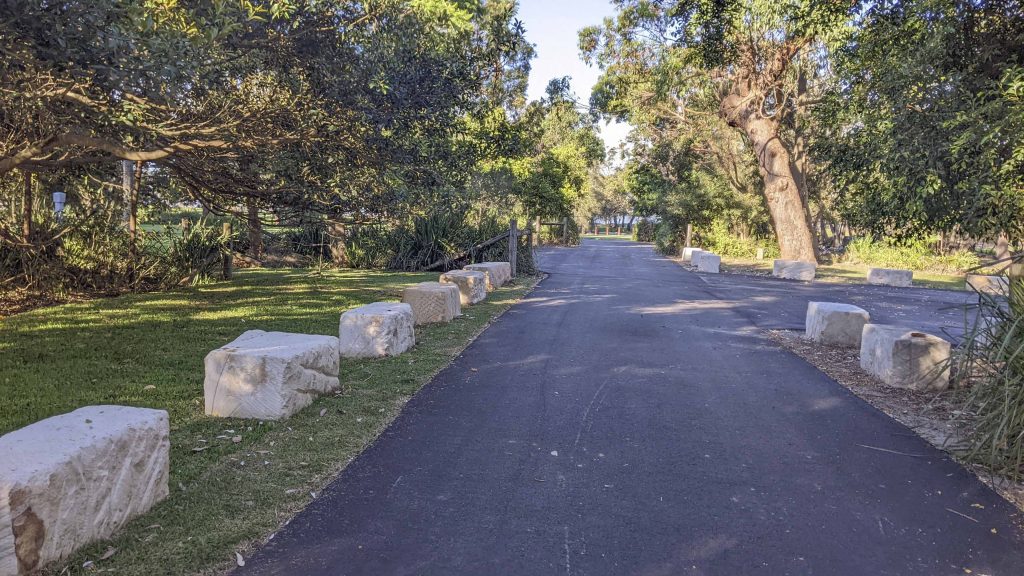 A new tarmac road has been laid through the campground, so no chance of dust from passing cars.

The campsite is due to reopen on the 10th January at reduced capacity. Sites will be available on a rotating basis to allow the new turf to establish. Follow this link to book your site.

The whole place looks lush and green…..just fabulous…..far too nice for cars, tents and caravans.

Ahem…excuse me while I pull my tongue out of my cheek.