Orchids in the Royal 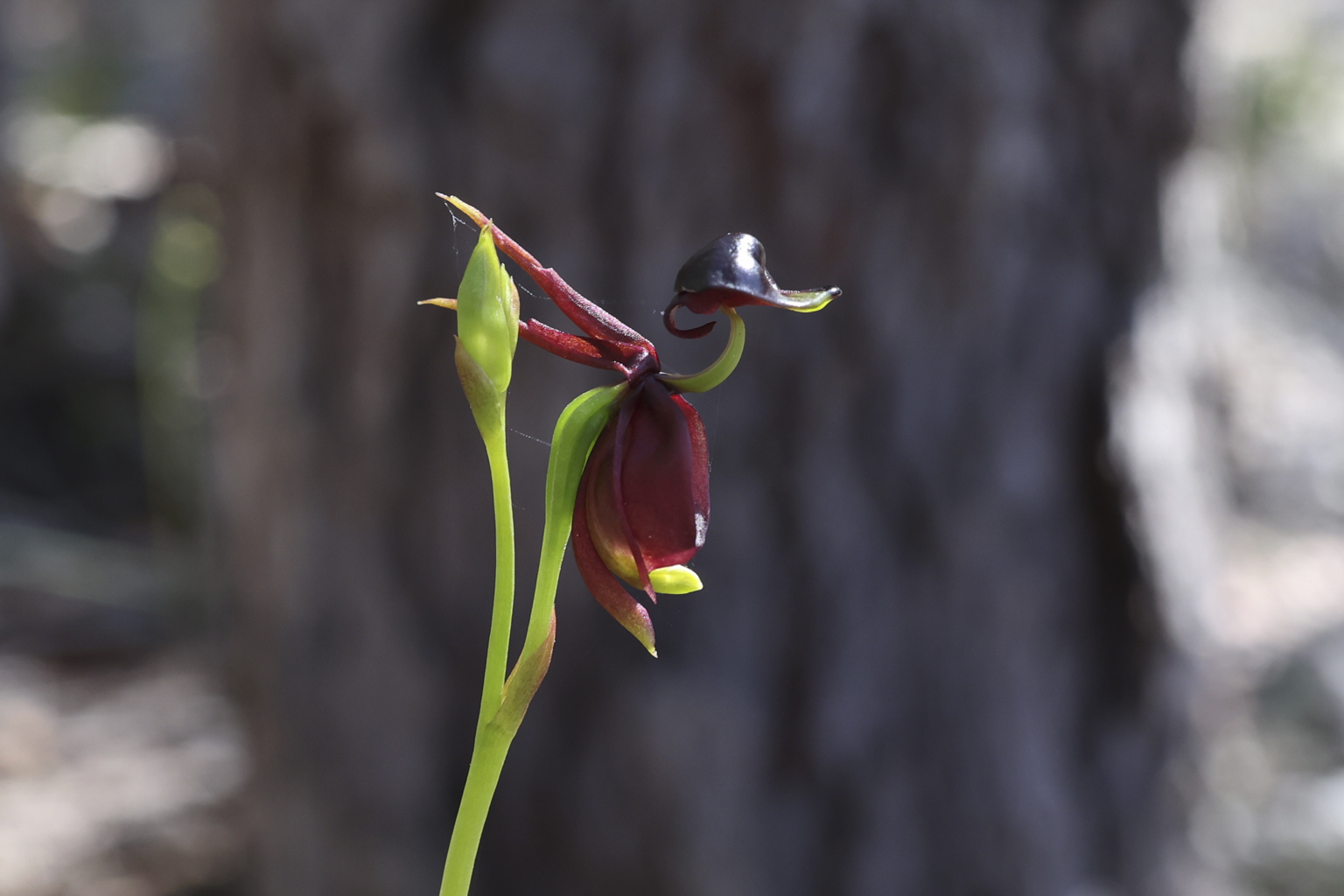 At this time of year in October, the NSW floral emblem, the Waratah, Telopea speciosissima, is in flower. It captures the eye of bushwalkers and many people are posting their pictures on social media. This has also inspired  those who  perhaps do not enjoy the delights of our local bushland on a regular basis to venture out (in between the rain showers).

Along the way, many of these visitors are posting photos of less familiar plants to them, which are often orchids. Below are a selection of orchids that can be found in our local bushland this month illustrated by wonderful photos from our members. We hope they inspire you to look closely around as you walk through the Royal.

Some of the more common species seen will be Caladenia. The picture below shows Caladenia catenata, commonly known as lady’s fingers, or the white caladenia, it is endemic to New South Wales with a single hairy leaf and one or two white, sometimes pale pink flowers, on a thin, sparsely-hairy stem.

Other closely related caladenia species can be found in a range of colours to dark purple, often with with stripes of colour and rows of different colour-tipped “calli” on their labellum. They seem to hybridise quite easily, making identification difficult in some cases. Small insects such as the tiny native bees are the pollinators and different species attract different insects by resembling the insects in some way. 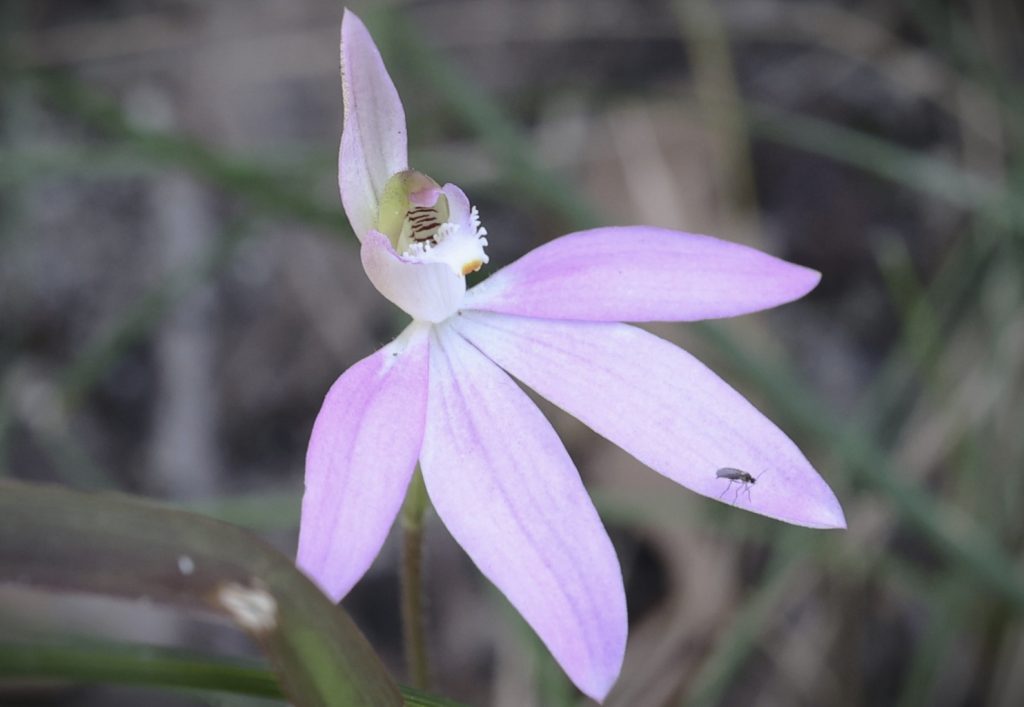 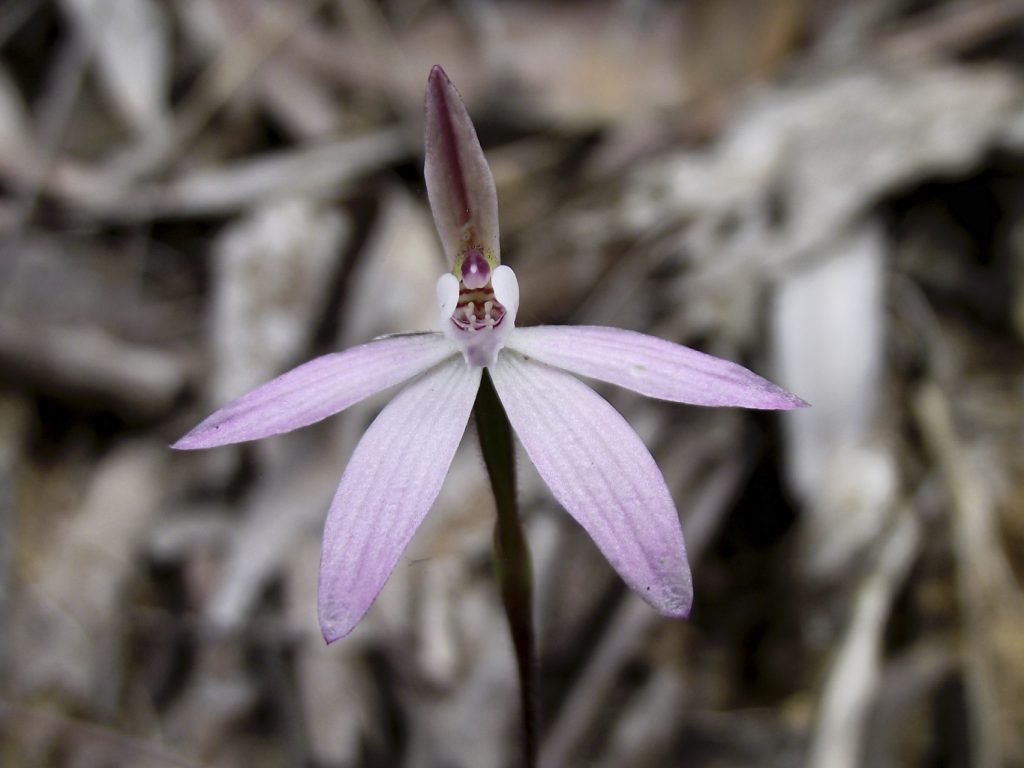 Diuris species – donkey orchids are also starting to flower and as the common name suggests, the two upright ‘ears’ can suggest a donkey. 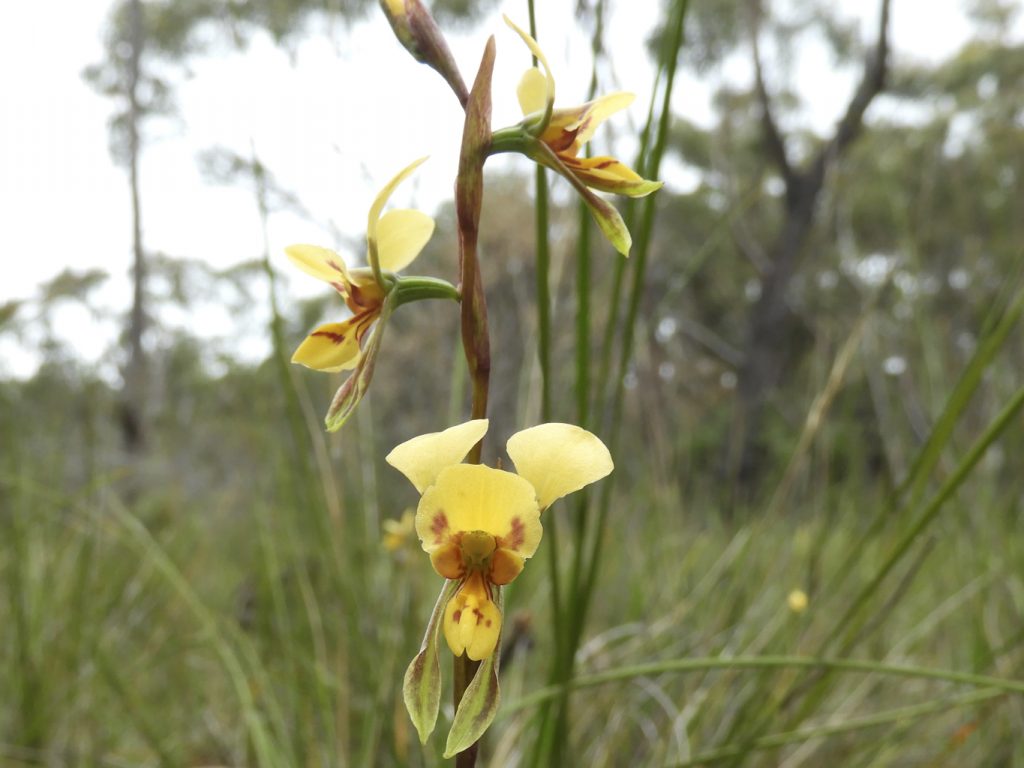 And another orchid suggests perhaps a tiger! 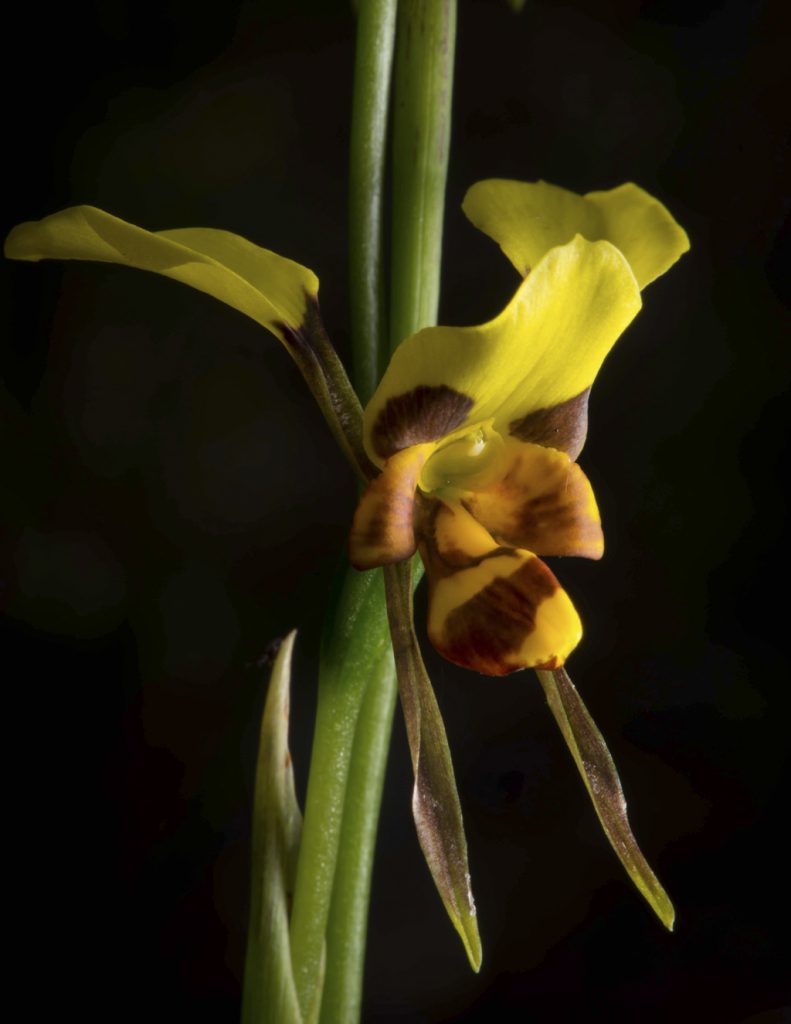 Another orchid with a common name describing what it looks like is the flying duck orchid, Caleana major which is wonderful to see in the wild. 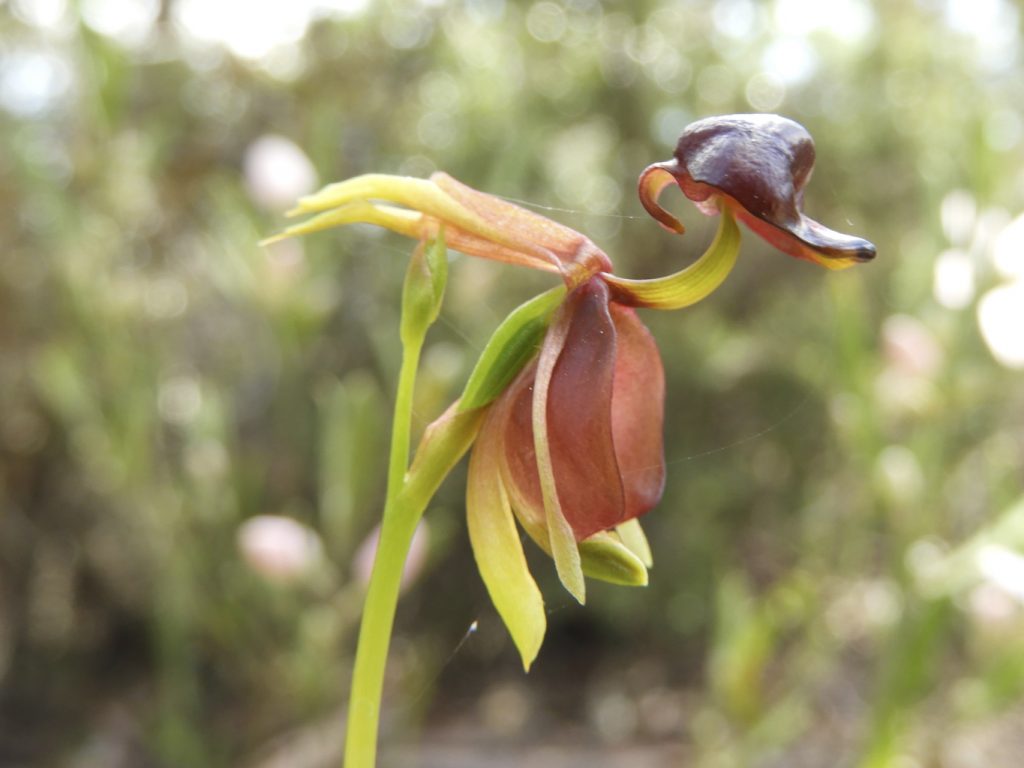 The Calochilus species common name are Bearded orchids, which are are also to be seen now. 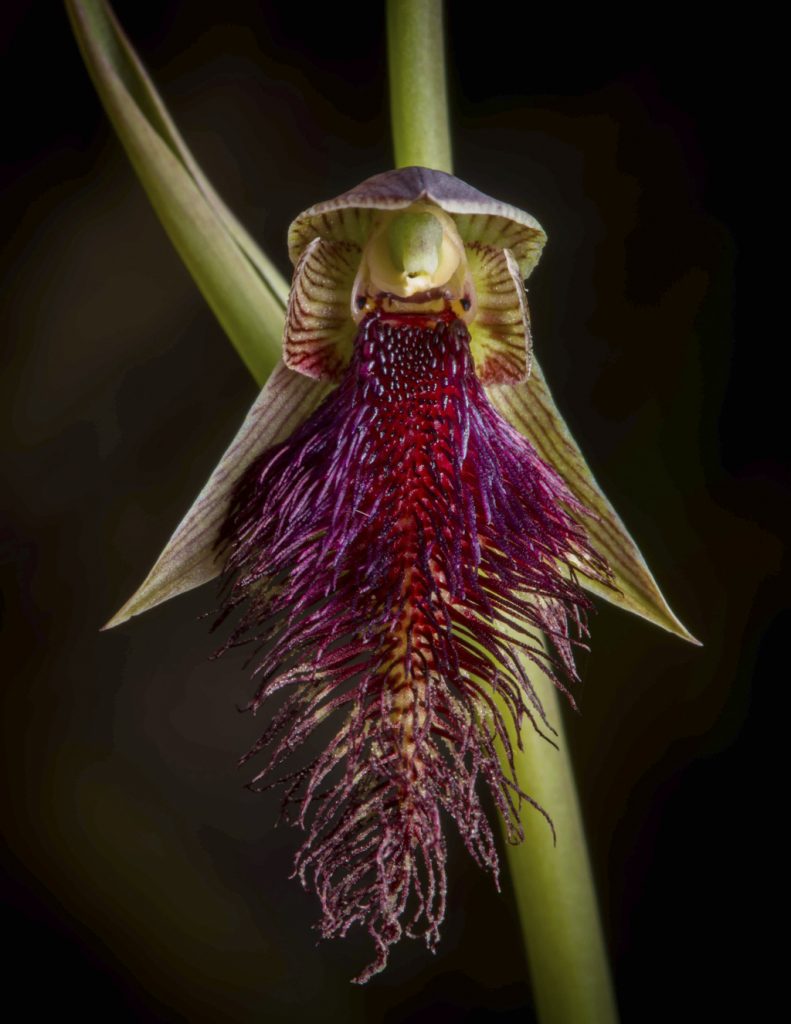 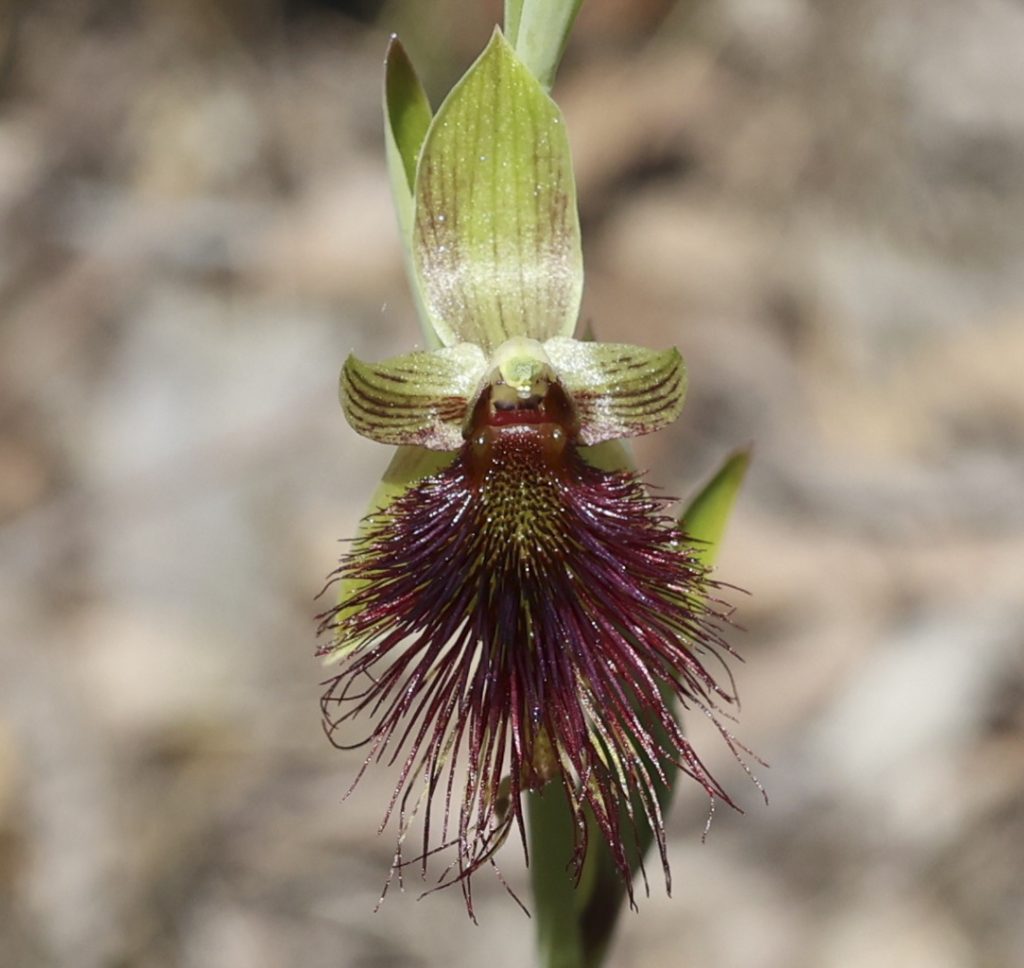 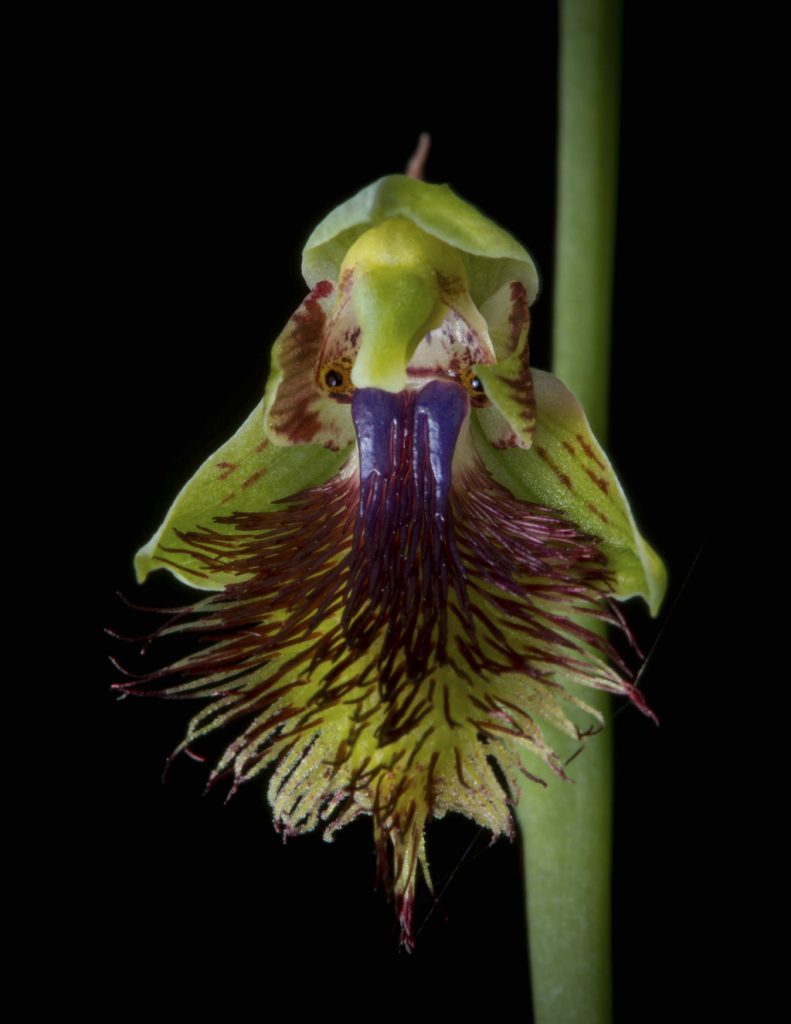 And if we ever see the sun again, sun orchids, often Thelymitra ixioides or the spotted sun orchid, so named because it closes up at night and in dull weather and only opens on warm sunny days. 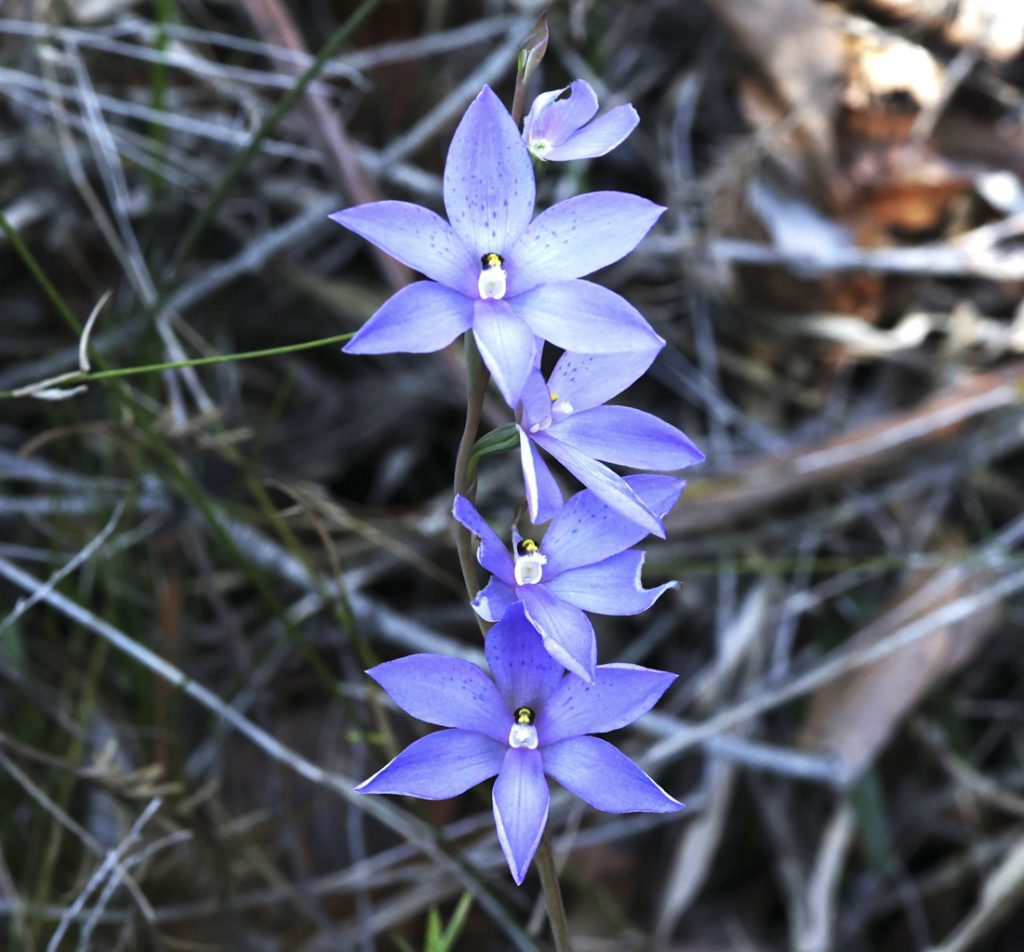 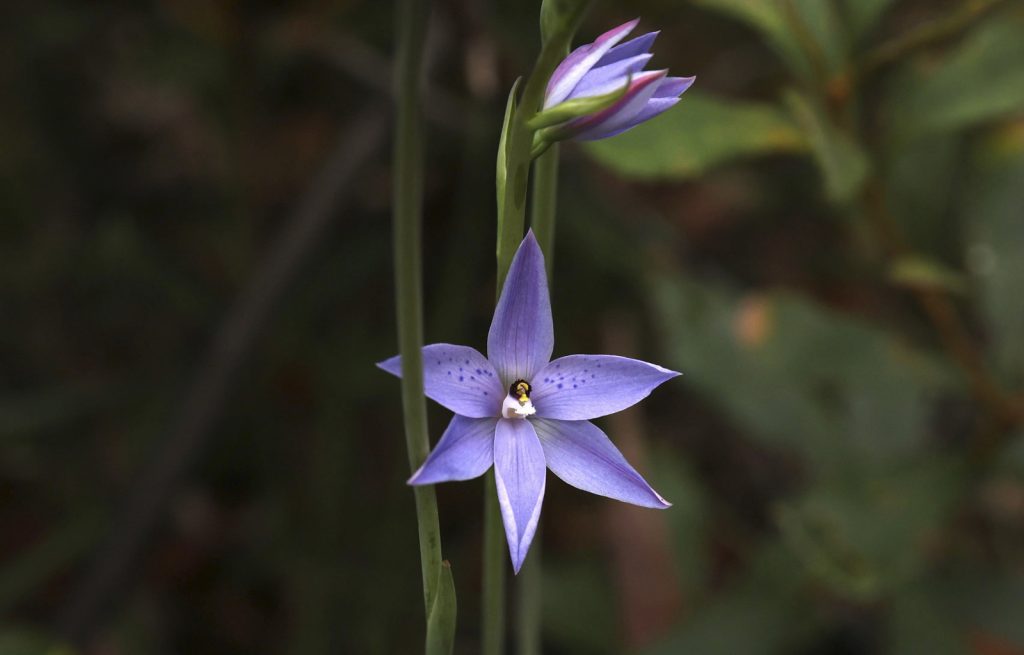 Leek orchids….There are over 140 species of Prasophyllum in Australia and the tall leek orchid shown below is one of the biggest growing to over a metre tall. The tubers were used as a food source by the first peoples. They are quite common, but others in the genus are threatened and rarely seen. Also pollinated by small insects. 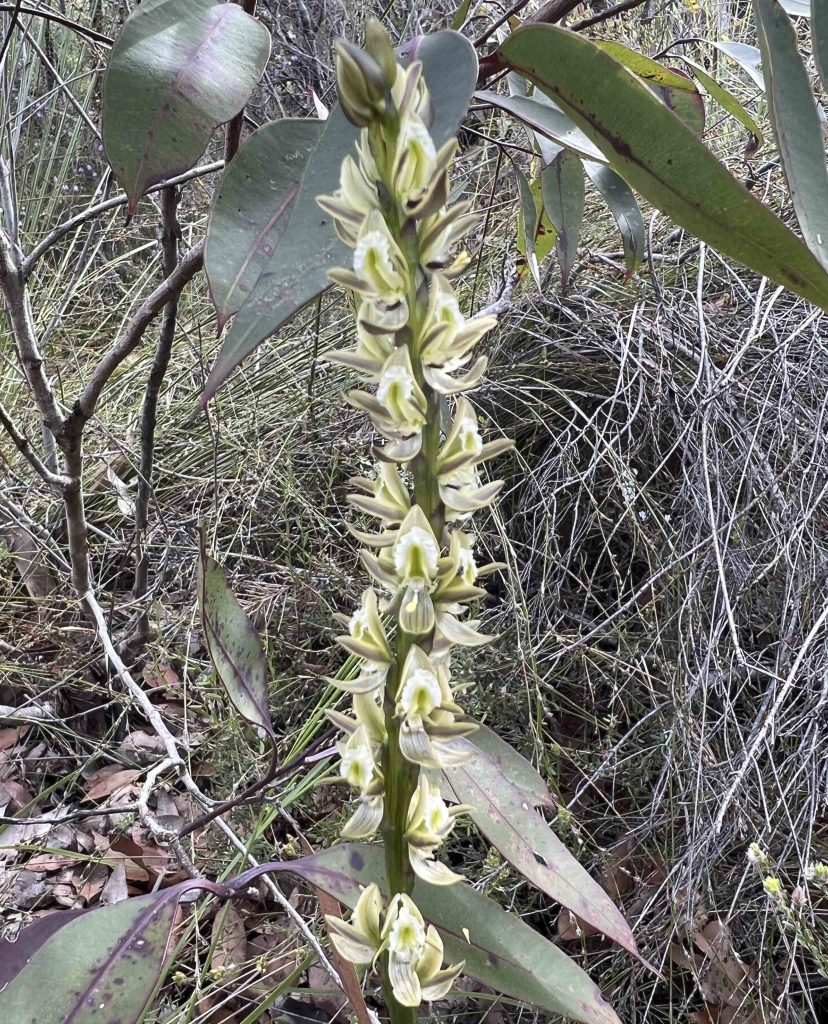 Rock Orchids…..The dog orchid shown below is uncommon, but one of several species of orchid found growing on rocks, like the more commonly seen Sydney Rock Orchid, Dendrobium speciosum. 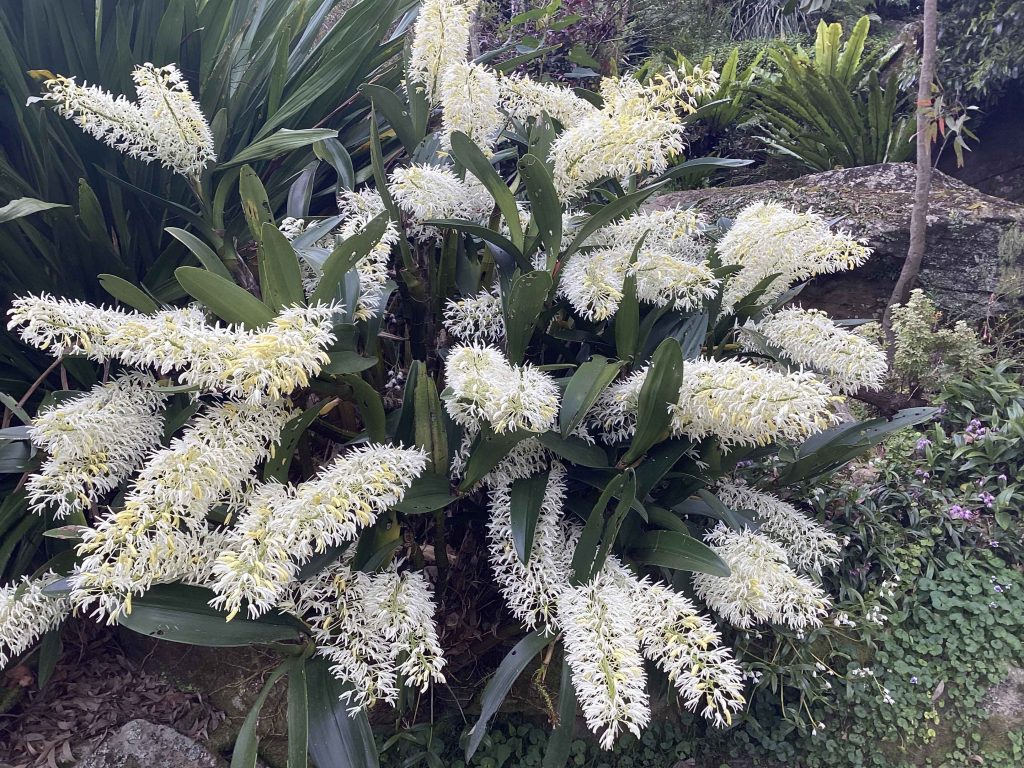 Dendrobium linguiforme – the tongue orchid is commonly seen on rock faces in the Royal, but not very often in flower, so most people do not realise that it is an orchid. It has sprays of small white delicate flowers. This was the the first Australian orchid to be botanically described. Linguiformis is latin for tongue shaped, referring to the shape of the leaves. 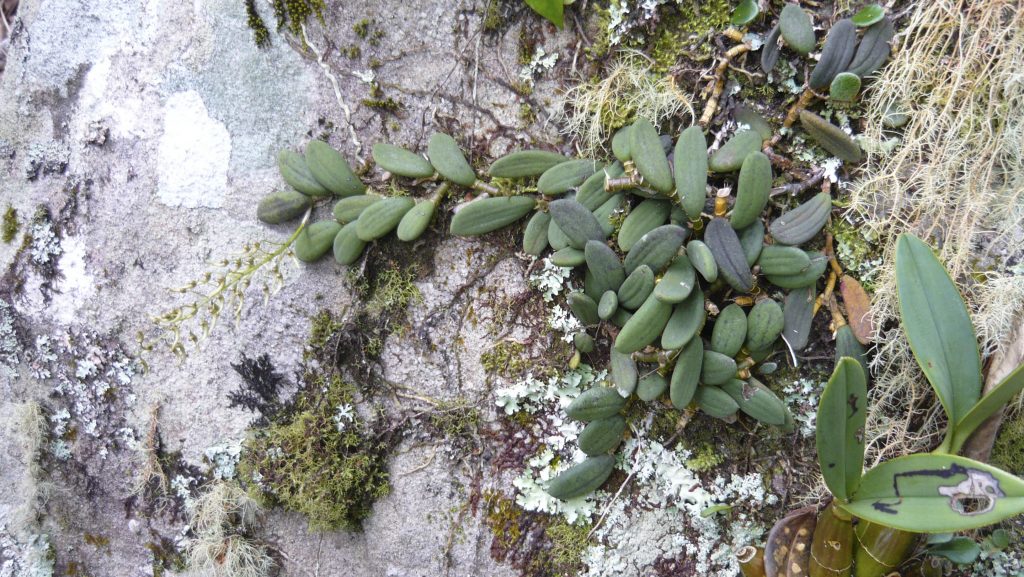 Microtis species……these plants are given the common name onion orchids because the single leaf from which the flower spike erupts, resembles that of the onion. A spike can have a hundred or more very tiny flowers. 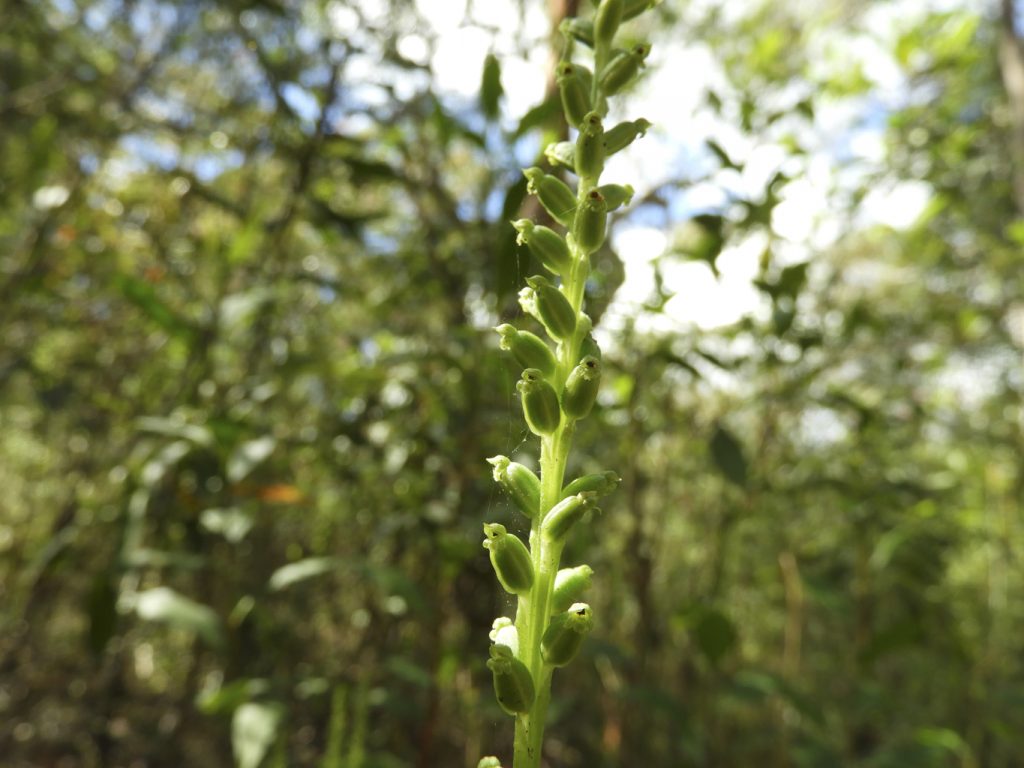 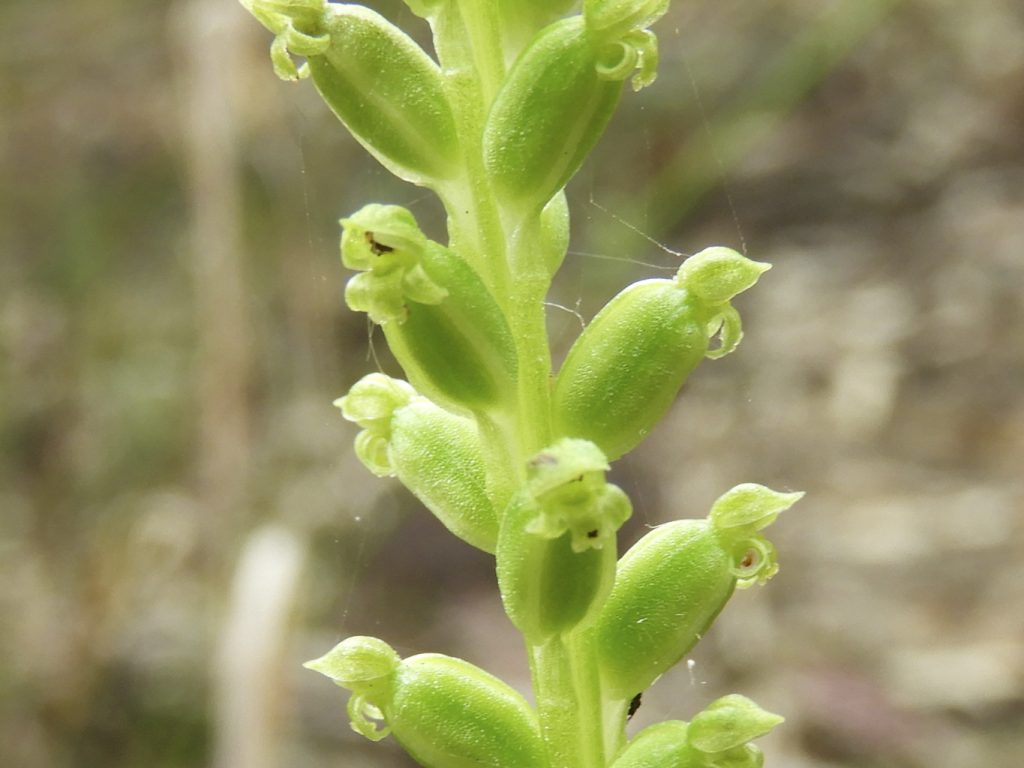 Climbing orchid……We use Latin names to identify species, because many plants, not just orchids, have several common names which change depending on location. This plant can often be seen in the same place year after year and will grow to several metres to find a tree to climb up and flower. The flowers have a pleasant smell. As the stem ages, it turns black, hence one of the other common names of black bootlace orchid. 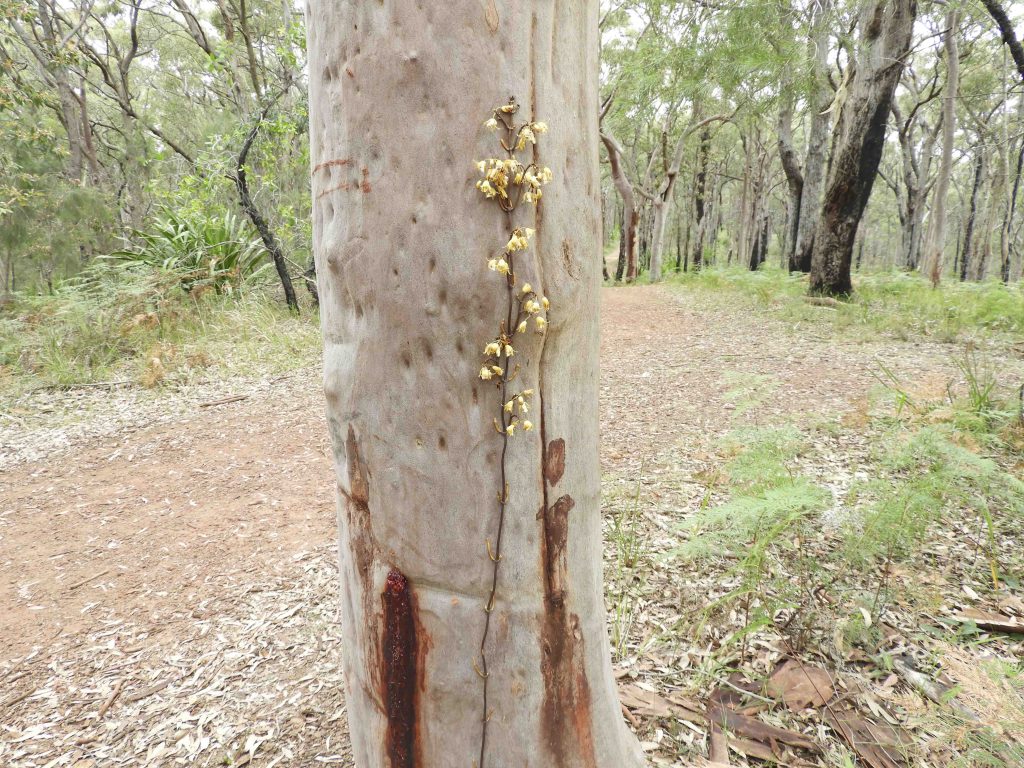 Many orchids are difficult to spot, so be careful when venturing off the path to not inadvertently stand on one.

Many websites will be happy to ID your orchid pictures, but just a reminder that local orchid expert Margaret Bradhurst has a book called Native Orchids of Southern Sydney, which is for sale on our web-site for just $25. Here is a link to go to our  Shop

A final reminder to NEVER pick any orchid, or indeed any flowers from the National Park, they are protected. Take pictures, but leave the plants for others to enjoy.